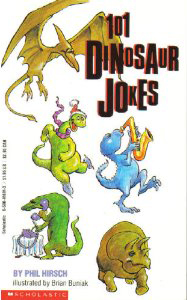 101 Dinosaur Jokes by Phil Hirsch
Did dinosaurs know how to use the telephone?
Probably — after all, the croco-dials! With dinosaurs, you’re sure to get the last laugh. Let the creatures of 101 Dinosaur Jokes tickle your funny bone and you’ll chuckle yourself into extinction!

I feel bad giving this any kind of rating at all because it’s officially the silliest book I’ve ever read in my entire life. It did feel like it was meant for kids, but I didn’t find that out until I got home and checked GoodReads– because, you know, you never know. In general, I have no idea what to say about this one. I did ‘chuckle’ quite a bit, and I’m pretty sure it wasn’t because how funny the joke was. It was because how silly I felt reading it. For example: – Why don’t we see any flying dinosaurs today?
– No air traffic controller would clear one for landing. See what I mean? *** Bunu bir de Türkçe yorumlamamın hiç bir manası yok. Saçma sapan, şapşal bir kitaptı kendisi.]]>