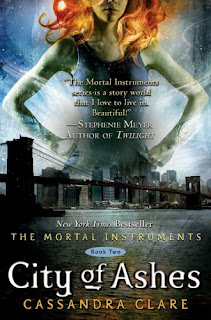 Clary Fray just wishes her life would go back to normal. But what’s normal when you’re a demon-slaying Shadowhunter, your mother is in a magically induced coma, and you can suddenly see Downworlders like werewolves, vampires and faeries? Clary would love to spend more time with her best friend, Simon. But the Shadowhunters won’t let her go– especially her handsome, infuriating newfound brother, Jace. And Clary’s only chance to help her mother is to track down rogue Shadowhunter Valentine, who is probably insane, certainly evil– and also her father. When the second of the Mortal Instruments is stolen, the terrifying Inquisitor suspects Jace. Could Jace really be willing to betray everything he believes in to help their father?


BEWARE: If you haven’t read the first book yet, this review might contain spoilers, so consider yourself warned. City of Ashes, the second installment of The Mortal Instruments series, picks up a little after where City of Bones leaves off. Clary’s mother is still in the hospital, and Clary’s staying with Luke, her uncle, and spending most of her time with Simon. She’s still dealing with having feelings for Jace, and having found out that he’s her brother, she’s having quite a hard time with it. In the meantime, she’s started up a relationship with Simon, which is more than just friendship. Of course, her time away from the Shadowhunters’ world doesn’t last very long since Valentine starts stirring things up again. He plans to build an army of demons to go against the Shadowhunters. That’s the little summary I’ve come up with, but when it comes to details, I honestly don’t know where to even start. There is just so much going on this book: so much action and so many emotions floating around. There’s the Jace-Clary-Simon love triangle, and then there is Isabelle and the fairy, and then Alec and Magnus, Luke and Clary’s mother…. There’s them dealing with the Inquisitor, vampires being born, fairies throwing feasts and Shadowhunters fighting off demons. There was also quite a bit of death and almost-death, which were rather emotional to read about where you might want to stop for a second and take a breath. In this book, we meet Alec and Isabelle’s parents, and their little brother Max. We get to know even more about the Shadowhunters’ world, see more of the vampires, the wolves and fairies. And then, of course, there’s the unimaginable number of different kinds of demons. We also find out what’s different and special about Clary and Jace and their abilities. Even though we do see quite a bit of that, it’s still not too clear what is going on and how they became that way in the first place, and I cannot wait to find out more. Remember my comment about Magnus Bane from my review of the first book? Well, I’m still behind that, and I think he might be my favorite character. He’s loving and caring and witty, and he has the best come-backs ever. The kids I do like just the same, yet I’m still not too sure about Luke. It’s not that I don’t like him, but I guess he’s too much of an adult for my taste. He really does carry all the weight of his past on his shoulders, and it’s very much visible in all his actions. All in all, it was amazing to see how all the main characters stick together and the sacrifices they make for another, and, of course, for the greater good. And remember how I said these books kinda reminded me of Harry Potter even though they didn’t have anything to do with each other? Well, there’s a reference to Harry Potter in City of Ashes. It’s very brief, but it did put a big grin on my face. It’s werewolves at the diner who would win if Dumbledore and Magnus Bane fought, and one of them goes, “Dumbledore would totally win. He has the badass Killing Curse.” At the risk of geeking out too much on this, I’m leaving it at that. In most of the YA books I’ve read, there’s usually at least one teen who’ll really piss me off. But with The Mortal Instruments, it hasn’t happened. They do act mature when they have to, and other than that they’re just regular kids. Clare definitely gets bonus points for not making them way too over dramatic or whiny.]]>