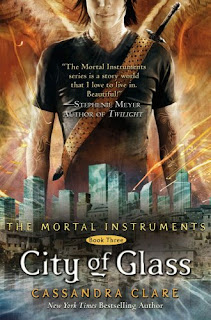 To save her mother’s life, Clary must travel to the City of Glass, the ancestral home of the Shadowhunters — never mind that entering the city without permission is against the Law, and breaking the Law could mean death. To make things worse, she learns that Jace does not want her there, and Simon has been thrown in prison by the Shadowhunters, who are deeply suspicious of a vampire who can withstand sunlight.

As Clary uncovers more about her family’s past, she finds an ally in mysterious Shadow-hunter Sebastian. With Valentine mustering the full force of his power to destroy all Shadow-hunters forever, their only chance to defeat him is to fight alongside their eternal enemies. But can Downworlders and Shadowhunters put aside their hatred to work together? While Jace realizes exactly how much he’s willing to risk for Clary, can she harness her new found powers to help save the Glass City — whatever the cost?

Love is a mortal sin and the secrets of the past prove deadly as Clary and Jace face down Valentine in the final installment of the New York Times bestselling trilogy The Mortal Instruments.

BEWARE: There might be spoilers if you haven’t read the previous books.
City of Glass is the third installment of the Mortal Instruments series, and since it was meant to be the last book in the series, this is where everything comes into light, if one can put it that way. The journey there, of course, is a tough and dark one, though. In this book, we finally see Idris and Alicante, the place where all Shadowhunters call home and miss to death. Clary needs something from there to save her mother and wake her up from her coma, Shadowhunters need to get together to decide what they’re going to do about Valentine, and Luke and Simon just kind of get dragged to the city even though they have no intention of going in the first place.
The warlock Magnus Bane is still my favorite character, and he and Alec are my favorite couple to watch. However, in this book, one of the most interesting parts was finding out more about Valentine and seeing how he became the monster he is. In the previous books, all the adults Valentine had been friends with in the past were mentioning how much they loved him, trusted him and believed him. And hearing about his past his past, I too believed that he was working toward a greater cause, but there was something underneath it, the fear of being less powerful than the Downworlders. The only reason he hates them is because he’s envious of them, which makes him quite pathetic, really. His ego gets the best of him and he experiences on his own UNBORN child. What kinda psycho does that?
In addition to all the action that takes place due to being at the edge of a war, there was also a lot of emotion floating around. And not just among the characters either– they reflect to the reader. I was on the verge of tears at one point and then I found myself getting mad the next minute. Shadowhunters (not all of them, but most) seriously ticked me off at certain point because they were thinking seriously about surrendering to Valentine instead of accepting they could get along with Downworlders and fight for their freedom.
We also meet quite a bunch of new people in Idris. When Sebastian was introduced, I knew something smelled fishy just because he was the way he was, yet I did not expect the turn of events. And there are certain things you expect to happen, and when they do they do in such an exciting way that it was so exciting to read about. There are deaths that are very much unexpected and very sad to read about, but then we find out that the deaths we didn’t care too much for in the previous books actually had great significance.
The character development is also another very well done part of this book. It’s, as always, amazing to see how they grow up–both the children AND the adults– due to what’s happening around them and with each other, and to see what lengths they’ll go to for one another because they’re friends and family. I’ve always liked Clary’s best friend Simon, and I was so sad for him, for how he’s in love with Clary and can’t help it even though he knows it’s never going to happen. The way he came to terms with everything, his love for Clary and the fact that he’s a vampire, brought me the greatest of joys.
Like I’ve mentioned before, City of Glass was meant to be the conclusion to the series, but it’s not and the fourth book, City of Fallen Angels is coming out in April. I’m very excited to see where it’s going to go because, seriously, it could go anywhere.
]]>