Book review: Dead as a Doornail by Charlaine Harris 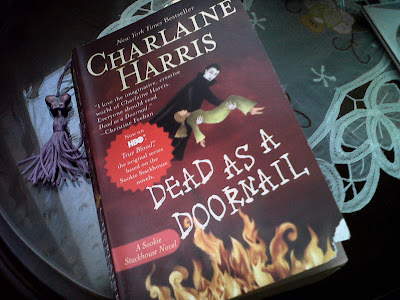 When she is not waitressing or preoccupied with her own amorous adventures, telepath Sookie Stackhouse is tracking down a serial killer of shapeshifters. Her sleuthing is partly altruistic, but she’s also trying to save her were-panther brother, Jason, who has become the chief suspect in the crime.

Sookie’s got just a month, before the next full moon, to find out who wants her brother dead – and to stop the fiend! Sookie Stackhouse enjoys her life, mostly. She’s a great cocktail waitress in a fun bar; she has a love life, albeit a bit complicated, and most people have come to terms with her telepathy. The problem is, Sookie wants a quiet life – but things just seem to happen to her and her friends. Now her brother Jason’s eyes are starting to change: he’s about to turn into a were-panther for the first time. She can deal with that, but her normal sisterly concern turns to cold fear when a sniper sets his deadly sights on the local changeling population. She afraid not just because Jason’s at risk, but because his new were-brethren suspect Jason may be the shooter. Sookie has until the next full moon to find out who’s behind the attacks – unless the killer decides to find her first.

WARNING: There might be spoilers if you haven’t read the previous books yet.
Dead as a Doornail, the 5th installment of the Sookie Stackhouse Novels actually was the one that got me all hyped up. I’ve been repeating myself a lot while reviewing these books, and it’s still true: I have a love and hate relationship with these series. Most of the hate derives from Sookie and her annoying, “I don’t wanna brag, but I’m the shit” sort of narrative, and the love comes from most of the rest of the characters, really.
Jason now shifting into a panther is a super-sexy twist, and I liked getting more into the world of the rest of the shifters. The suspense of someone attacking them was rather great as well, even though it was way too obvious who was doing it, and I was hoping I had guessed wrong. Still, everything leading up to finding out who it was made an enjoyable read, especially with the werewolf rituals we never got to see before.
Eric also finally found out what happened between him and Sookie when he was under the spell of the witches, and I’m hoping -and I KNOW- he’ll be using that somehow in the upcoming books. That shall most definitely be exciting to see. Bill was kind of around, but then not so much, and I honestly have nothing to complain about when it comes to Bill’s absence. I’ve always found him quite boring.
And then there’s Tara’s situation… I felt that blew over pretty quickly, and it was way too rushed. Was it just to bring Bill and Eric into the same room with Sookie so she can remember sleeping with them both? If so, it was way too unnecessary. I wonder if anything more is gonna happen on her end.
Alcide was weird in this book, and I didn’t like it. He wants Sookie, and he also wants to use Sookie’s “gift,” and then Sookie’s mad at him for not feeling anything toward his ex anymore? And she kept dwelling on having killed Debbie all through the book just to have the evidence be buried in the end. I’d like to see Sookie being brought in front of some sort of a werewolf court, but Alcide being stupidly in lust with her as he is, I doubt that will happen. All in all, I’m not a big fan of the wolves. So next time, more fairies and more vampires, please, especially Eric.
]]>

Book Review: No One Writes to the Colonel by Gabriel Garcia Marquez