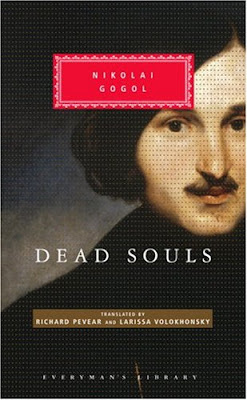 Dead Soul is eloquent on some occasions, lyrical on others, and pious and reverent elsewhere. Nicolai Gogol was a master of the spoof. The American students of today are not the only readers who have been confused by him. Russian literary history records more divergent interpretations of Gogol than perhaps of any other classic. In a new translation of the comic classic of Russian literature, Chichikov, an enigmatic stranger and schemer, buys deceased serfs’ names from their landlords’ poll tax lists hoping to mortgage them for profit and to reinvent himself as a gentleman.

I should start by stating two important things:
1. I really should make a point of reviewing a book right after I read it because then I forget what I want to say– like now.
2. I’m not a fan of Russian Literature.
This was the first book we picked for our book club, Ex Libris. Like I’ve said above, I’ve never been a big fan of Russian literature, yet you have to admit the subject matter makes one very curious as to how a story like that will unfold. This book was very hard to get through, that I’ll admit, but I also have to say that why I wouldn’t want to read it again, I did not hate it either.
Gogol is very attentive to detail, which is something I appreciate if it’s not over done. His descriptions, however, were way too detailed and way too long for me most of the time. I think this was my biggest problem with the book. And my “thing” in general is that I like to assign colors to books. Like, a vampire book would be red, nothing special there. A science fiction book would be sparkly purple, a novel that contains a lot of sorrow is brownish-orange… Most of the Russian literature I’ve read are gray. So was Dead Souls. And I’m not too big a fan of that. Moving on…
The way the book was structured was like watching different episodes of a television show, each chapter being a different episode. We follow Chichikov as he travels through people and places, collecting dead souls. We watch every encounter down to the tiniest details, and they very much put forward what it must have been like in Russia around those times. I very much enjoyed all the different characters, all stereotypes of different types of people. I’m sure even today we know many people who are just like them in character. The plot was very well structured, the writing was amazing, and the historical details made it richer. Yet I still do think I’m done with Russian literature for a while.
]]>