Book Review: Dead to the World by Charlaine Harris 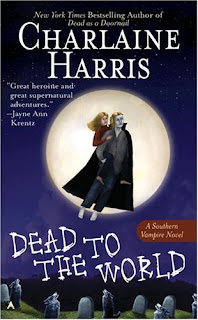 When cocktail waitress Sookie Stackhouse sees a naked man on the side of the road, she doesn’t just drive on by. Turns out the poor thing hasn’t a clue who he is, but Sookie does. It’s Eric the vampire–but now he’s a kinder, gentler Eric. And a scared Eric, because whoever took his memory now wants his life.

First of all, I’d like to remind everyone that I rate these book on Eric Northman’s deliciousness and the story overall because if I take into account Sookie and Bill, it will not work. They annoy me to death. So, moving on… The 4th installment of the series, Dead to the World, was amazing because of 2 things: 1) Bill was gone. 2) Eric was around A LOT. Sookie finds Eric running around half naked on the side of the road, and he has amnesia. It turns out there are witches out to get vampires. And then, Jason disappears, which was sad ‘cos he’s always fun to have around…
Eric having amnesia was all cute and sweet at the beginning, but then I realized I like him because he’s dangerous and has that “whatever” kinda careless attitude. Why he wants Sookie, I’ll never know, and I’m okay with that. I usually manage to sympathize with the main characters, but so far that has not happened with Sookie. Yes, we all feel confident at times, and yes, we all we insecure sometimes, too, but I can’t shake the feeling that all her highs and lows are way overdone. And she really needs to get rid of that god damn Word of the Day calendar. (She never does, does she? Go ahead, you can tell me; I’m already prepared for the worst)
The witches being around and the different kinds of shifters in addition to the wolves coming into the picture was rather exciting, but events themselves moved way too slowly for me. I still have a weird relationship with these books in the way that I don’t hate them, I don’t love them, but I don’t regret reading them either. The plus side is that I am indeed curious about what will happen next, so we shall see.
P.S. Does Eric have chest hair or not? Or does it come and go?
]]>