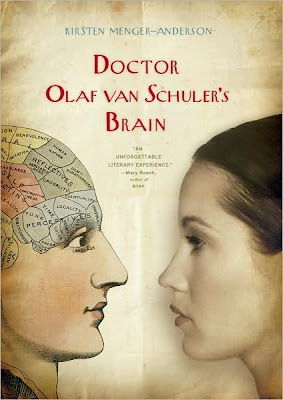 Title: Doctor Olaf van Schuler’s Brain
Author: Kirsten Menger-Anderson
Release date: October 9, 2008
Publisher: Algonquin Books
Number of pages: 304 In 1664 Dr. Olaf van Schuler flees the Old World and arrives in New Amsterdam with his lunatic mother, two bags of medical implements, and a carefully guarded book of his own medicines. He is the first in what will become a long line of peculiar physicians. Plagued by madness and guided by an intense desire to cure human affliction, each generation of this unusual family is driven by the science of its day: spontaneous combustion, phrenology, animal magnetism, electrical shock treatment, psychosurgery, genetic research. As they make their way in the world, New York City, too, evolves—from the dark and rough days of the seventeenth century to the towering, frenetic metropolis of today.

Read the first and last line of the book at firstandlastlines blog. Doctor Olaf van Schuler’s Brain starts with his story and continues with the stories of the next generations. Schuler’s mother is a mad woman, and he believes if he fixes the soul, which he believes is in the brain, he will solve her problems. He experiments mostly on animal brains, but he does get a hold of human brains as well whenever possible. Great story, right? WRONG.
I am very disappointed by this book. The promise was very exciting, and there are parts of the book I very much enjoyed, like the first and last stories. Yet, the author doesn’t seem to have much a style, and the stories are told quite matter-of-factly. This is the story of (supposed to be, really) a family who are obsessed with the human brain and the soul for generations and generations, starting from 1600s up to 2000s. It was hard to even comprehend the connections of the family members, let alone highlighting what they do and are trying to accomplish. I didn’t get much of a sense of the different time lines either.
The chapters did overlap just a little bit, but other than that, they could be stories of completely different people, and you wouldn’t know. Characters were quite disconnected as well. For me, characters are just as important as the story line, yet we didn’t really get to know any of them. We met them for quite a bit and witnessed a very short part of their lives, but that’s about it. For the most part, we don’t even get to find out where they did or might end up.
Lastly, Patrick Süskind’s Perfume is one of my favorite books of all time, and I’m rather angry that this was compared to it. Honestly, it doesn’t even come close. It doesn’t have the sense of curiosity or suspense or cringe-worthiness. Most of all, you don’t feel anything toward any of the characters, which is very opposite of Perfume. I’d say go read Perfume and don’t even waste your time with this one.