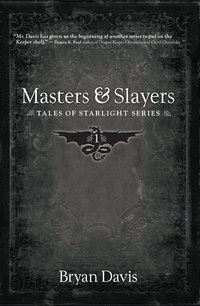 
Expert swordsman Adrian Masters attempts a dangerous journey to another world to rescue human captives who have been enslaved there by dragons. He is accompanied by Marcelle, a sword maiden of amazing skill whose ideas about how the operation should be carried out conflict with his own.

Since the slaves have been in bonds for generations, they have no memory of their origins, making them reluctant to believe the two would-be rescuers, and, of course, the dragons will crush any attempt to emancipate the slaves. Set on two worlds separated by a mystical portal, Masters and Slayers is packed with action.


(Autographed copy received from author.)
This is one of those books where I feel like if I get too excited and type away, I’ll give way too much away. It was a busy time at work when I read this, and I’m even thinking it was a good thing ‘cos the excitement was rather enjoyable. It will most definitely make you think “One more chapter before I go to sleep” as you see the clock hit 4am, especially if you’re the “Dragons? Count me in!” kind of person like I am.
This is the story of young warriors who set out to save the humans kidnapped by dragons and kept at the dragon planet for forever. Adrian is one of the main characters, who gives up the glorious world of the tournaments to find the dragon planet and rescue the kidnapped. One of the popular warriors, Marcelle, is also in this with Adrian. They must figure out where the portal is, but they must be careful about it because their society will not like what they’re up to.
To me, the characters are pretty much as important as the story itself, maybe even more. And I really, really liked Marcelle. Most of the times when there’s a female heroine, they’re either too girly, or stupidly brave. Marcelle was pretty much perfect in the way that she’s a girl, but she’s a strong girl who can take care of herself without going overboard and putting the reader off.
On their quest to find the dragon planet, there are also other characters who enter the scene, and there’s lots of action, sword-fighting, slaying dragons… There’s also the interaction between the characters– they must decide whom they can trust, who’s the enemy, who’s on their side. Some of the characters we don’t know much about yet, but I have a feeling they’ll show up in the following books, and we’ll have a lot more “whoa!” moments. Masters & Slayers has everything one looks for in a book: strong characters, betrayal, love and action.
]]>

The Blackberry Bush by David Housholder - out on June 1st