Book Review: No One Writes to the Colonel by Gabriel Garcia Marquez 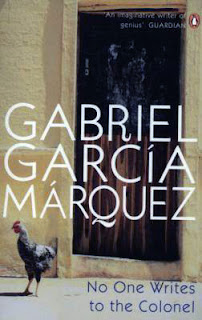 Gabriel Garcia Marquez has been my favorite author for eleven years now. When I was a sophomore in high school, there was a book called Red Monday (English title: Chronicles of a Death Foretold) on our reading list. You know how they usually make you read physically big and heavy books in world literature class? Well, this one was a tiny book, and I suspected two things: 1) It was going to be such a tough book and we were all going to flunk the test; 2) It was such an amazing book that it didn’t need that many pages. Of course, my second suspicion turned out to be true. After that I started down hunting down anything Marquez wrote and sucked on them like a fat kid sucks on ice cream.
I know this turned into an anecdote when I’m supposed to be writing a review, but I just really REALLY love Marquez. Especially when the weather starts getting warm, one must read one of Marquez’s works, doesn’t matter which. He always meets expectations and exceeds them, and No One Writes to the Colonel is no exception.
This story takes place within the same time line as Hundred Years of Solitude and My Melancholy Whores, during the Thousand Days’ War. The fact that we never found out the names of the main characters of the story is proof of how insignificant human life was during those times in Colombia. The Colonel has been waiting for his pension payment to arrive for fifteen years. Whenever the postman is due to arrive in his town, he gets all dressed up and goes to get his pension payment, but he never receives any letters. The Colonel’s son is dead, and he and his wife sell their belongings to make enough to live, yet after a while they run out of things of value to sell.
His wife suggests the Colonel that they should sell the rooster, which is the only thing their son left them. The Colonel is a man with pride, and he doesn’t like doing such things, but he has to. Later, his son’s friends suggest that he should not sell the rooster and enter it to rooster fights instead. The story reflects what life was like during those times, how there was a lot of censorship going on and how a lot of people were in the same situation as the Colonel and his wife. Of course they weren’t good times for those who were living it, but with Marquez’a beautiful story telling I found myself wanting to go and see it for myself.
I suggest you read this book on a hot, lazy day and then take a good long nap.
]]>

Book review: Dead as a Doornail by Charlaine Harris