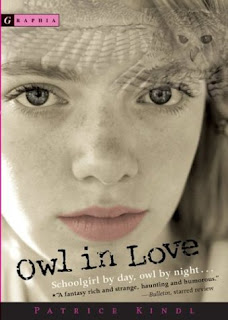 Owl, 14, is charmingly offbeat; she hangs out at night in a tree near the home of her one love–science teacher Mr. Lindstrom. What makes her nocturnal vigils relatively easy is that she’s a “wereowl” whose nightly transformation ruffles her feathers no more than does her diet of rodents. Wereowls run in the family, so Owl is comfortable with her identity, though the efforts demanded by her one-sided love are wearing her a bit ragged. When she observes a boy lurking near Mr. Lindstrom’s home, the stage is set for shedding the schoolgirl crush for a more transcendent romance. Owl’s perspective is no birdbrained view; readers are soon solidly immersed in her wild, wise, and witty ways. Lofty phrasing, wry self-awareness, and passionate musings frame and fill a delightful first-person narration. Owl’s quaint parents play several scenes for humor and have foibles enough to complete Owl’s typical teenage alienation. The tidying up at the end is a little overneat and abbreviated; otherwise, an unusually strong and original first novel.

I’ve been thinking about how to review this book, but I was mostly drawing blanks, so I’ll just type it as it comes… I haven’t read too much YA fiction, but I must say this was very, very different from those that I did read. That’s something to be appreciated, but it just didn’t work for me. Maybe it’s because I’m way too old for this book, I don’t know, but I didn’t feel any connection with Owl. Honestly, mostly she just creeped me out…
Owl’s a 14-year-old girl, who’s also a shape shifter. And as you can guess from her name, she shifts into an owl. Her blood is black, unlike humans’, which gives her skin a weird color, but people at school don’t seem to care much about it. Before I get to her being in love with her science teacher, I’d like to say a couple of more things about her… She turns into an owl at night and hunts. She doesn’t eat human food at all. She’s seen microwaves in magazines, but jumps when it beeps. And her parents are just way off-beat for my taste, having nothing to do with the human world yet living in it.
I felt like Owl was more of an owl than human. But then she always finishes her homework and is a good student. I just didn’t understand why she even bothered going to school and studying when she has no intention of blending in and is condescending toward humans. Is it just because she gets to be in love with her science teacher? I don’t know. But that creeped me out too.
Obviously, her science teacher, Mr. Lindstorm is way, way older than her. Being an “owl” though, as she puts it, she’s pretty sure he’s her destined mate. And when she tells her parents about this, they get all excited and tell her they should get married, which was one of my biggest WTF moments, honestly. Another one is her watching Mr. Lindstorm’s room through his window at night, when she’s in owl form. It was okay in the beginning because I thought, “you’re 14 and in love, of course you’re gonna wanna watch at every chance you get,” but I draw the line at her giving us the brand and size of his underwear. That was just way more than I wanted to know.
Through Mr. Lindstorm, however, Owl gets to find a boy who’s a shape shifter just like her. At this point, I honestly couldn’t take anything seriously because, like I’ve said, the entire thing just felt way too weird and at times kinda ridiculous to me. Like when she puts a rat in between two slices of bread and eats it. I have a soft spot for owls, but I couldn’t even watch Ratatouille without getting grossed out, so you my point.
If you’re looking for a quick, different teen read, then you should check this out. Judging by the reviews I’ve read, there are people who list it among their favorites and read it over and over again, so it’s worth giving it a try.
]]>