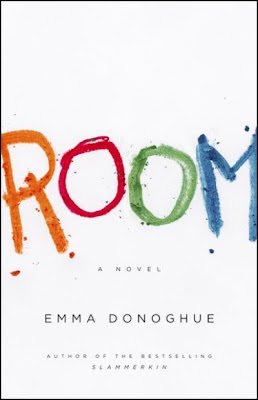 To five-year-old Jack, Room is the entire world. It is where he was born and grew up; it’s where he lives with his Ma as they learn and read and eat and sleep and play. At night, his Ma shuts him safely in the wardrobe, where he is meant to be asleep when Old Nick visits. Room is home to Jack, but to Ma, it is the prison where Old Nick has held her captive for seven years. Through determination, ingenuity, and fierce motherly love, Ma has created a life for Jack. But she knows it’s not enough…not for her or for him. She devises a bold escape plan, one that relies on her young son’s bravery and a lot of luck. What she does not realize is just how unprepared she is for the plan to actually work. Told entirely in the language of the energetic, pragmatic five-year-old Jack, ROOM is a celebration of resilience and the limitless bond between parent and child, a brilliantly executed novel about what it means to journey from one world to another.

This was the second book we read in my book club, Ex Libris.
Room by Emma Donoghue tells the story of Jack and her mother, who are literally stuck living inside a room and aren’t allowed to go or even look outside. Old Nick, as the man who kidnapped the mother is called, brings them food and things– on his own terms. Jack was born in the Room, which has no windows except for a skylight that doesn’t show much, and all he knows of the world is what his mother tells him. He watches TV, yes, but for the longest time he thinks there are people “in” the TV and that nothing he sees on there is real.
I was rather amazed by how Donoghue makes a 5-year-old boy tell the story without me wanting to gauge my eyes out. At the same time, he’s just like any other kid would be. He wants to play, he wants his mother to pay attention to him at all times, he doesn’t want her or himself hurt, he likes to stick to his schedule. Jack and “Ma” have their own schedule in the Room, which, like I’ve said, Jack was born into. So when they’re finally rescued, both him and his Ma have a very hard time, both for very different reasons.
I didn’t research this well, because I don’t care, but I also can’t help but mentioning seeing some people who give the book crap for being on a true story, mainly the Fritzl case. And the reason I mention this is because for me it’s another aspect of the book that makes it fascinating. Are any of us unfamiliar with these kind of events taking place in real life? How many times have we seen such a thing on the news and cursed the hell out of those evil people, hardly comprehending such a thing would happen? My answer is, more times than I’d like to remember, and I’m pretty sure there were those that were never found or made it to the news.
Yet I found myself not being able to stop reading just to see what was going to happen. Yes, you take a deep breath once they’re saved and go, “phew!” but as it’s way more obvious for Jack than it is for Ma, being saved doesn’t mean they get to just keep on living their lives. Seeing how the sun, the breeze, the grass, the rain, the stairs and everything are all new to Jack made me realize how much we take for granted just because they’re always there.
I think my favorite part was observing Jack while he himself observed the Outside. He makes quite a few points that I wouldn’t even think of. One of the questions he has, for example, is why do people say “careful” after you’ve yourself? Really, why not before you get hurt? And then, when they drive by a park after Jack’s been to a different one, he thinks everything’s in the wrong place and that something’s just very wrong, until someone tells him that’s a different park. His reaction, which I loved, is “Lots of the world seems to be a repeat.” You’re right, Jack, you’re so right.

On kind of a last note, and this might be a spoiler if you’re a nerd like I am, the version of the book I have has the cover you see on the right. I kinda wish I waited to get the other one I posted on top because after reading the book, I think the designers were very clever about it. When Jack and Ma are in the clinic, Dr. Clay gives Jack crayons so he can draw for him the Room. Jack says there are 120 different colors in the box, but he picks five; blue, green, orange, red and brown because that’s all he had in the Room. See; orange, red, green and blue on the cover, in a child’s handwriting. Am I getting way too excited about this? Well, shit happens.
]]>