Blogger is finally unbanned in Turkey, but it still isn’t working. So even though I’ve written this review last week, I’m finally just able to post it. In the midst of all this commotion, I’ve also realized that I totally missed the first year anniversary of my blog! It didn’t really start taking shape until April, so I guess celebrating next month shall be fine. Now onto the review… 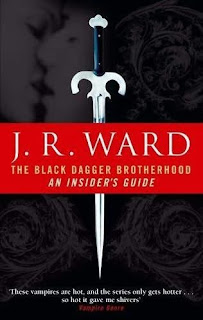 Prepare to enter the dark, passionate world of the Black Dagger Brotherhood and get up close and personal with each of the Brothers…. You’ll find insider information on the Brotherhood, including their dossiers, stats, and special gifts. you’ll read interviews with your favorite characters, including a heartbreaking conversation with Tohrment and Wellsie, conducted three weeks before she was killed by lessers. You’ll discover deleted scenes — accompanied by the whys behind the cuts — in addition to exciting material from the J.R. Ward message boards and the answers to questions about the series posed by readers. you’ll learn what it’s like for J.R. Ward to write each installment of the series, and in a fascinating twist, you’ll read an interview with the author — conducted by the Brothers. For the first time ever, you’ll see an original novella about Zsadist and Bella, and witness the miracle of their daughter Nalla’s birth and experience the depth of their love for each other. Also, you’ll receive a sneak peek at the much anticipated next book in the Black Dagger Brotherhood series, Lover Avenged, Rehvenge’s story. This is a compendium no black Dagger Brotherhood fan should miss…and an insider’s guide that will seduce you as powerfully as the sexy band of Brothers and the “ferociously popular” world in which they live.

In J.R. Ward’s The Black Dagger Brotherhood: An Insider’s Guide, you really do see the inside of EVERYTHING: from how Ward created the characters to her writing and publishing process and to what the brothers and shellans are up to outside of the books. When I first started the book, I wasn’t too sure of what to expect, honestly. All I remembered was my friend Kathy — she’s the one who got me obsessed with the series– telling me we got to see the Old Language. For one reason or the other, that was the part I was most excited about.
Boy, was I keeping my expectations low! First of all, I absolutely loved hearing about Ward’s process. No offense to any of them, but authors tend to not be able to explain HOW they write, and they tend to end up giving vague answers like “I just put what’s in my head on paper.” Ward does say the same thing as well, but she goes on further: she talks about how she struggled with certain characters and story lines and how shit actually got “hard” at certain points. To me, that makes her real and honest, and I appreciate it.
I’m going out of order here, actually, since the book starts with a story of Zsadist, Bella and Nalla. I must say, Father Mine was absolutely heart-breaking and lovely at the same time. Knowing Zsadist’s past, you can imagine him having problems with having a ‘young,’ but seeing how he evolves and comes in terms with it was amazing.
I think I shouldn’t go into every single section, ‘cos this could go on forever! So, my other favorite parts were J.R. interviewing the brothers, Kick and Giggles, Slices of Life from the Board. Especially the brothers going on the forums and starting shit up got me laughing out loud and lead to people on the bus staring at me like I’m some sort of freak, but I couldn’t care less. I’ve been head-over-heels in love with Rhage, a.k.a. Hollywood, ever since I’ve read his book, and that has not changed. Therefore, the shenanigans he started up got me giggling like a school girl. And him and V going at it to get back at one another was just flat out hilarious.
The Insider’s Guide came out after the sixth book, Lover Enshrined, which is Phury’s book. I didn’t read it till after Lover Mine, though, and I don’t think it makes that much of a difference except it would be pretty cool to get some insight on Rehv and john Matthew as well, which came after the Guide was published. All in all, if you love the BDB series, you’re definitely going to enjoy the extras in this one.
]]>