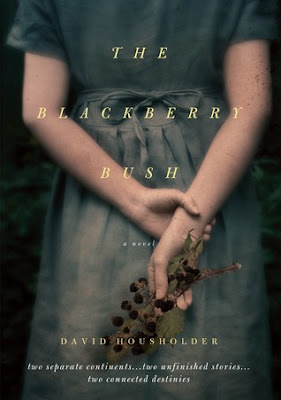 The Blackberry Bush by David Housholder
Paperback, 208 pages
Will be published on June 1st by Summerside Press Who are You, and what are you doing here? Two babies—Kati and Josh—are born on opposite sides of the world at the very moment the Berlin Wall falls. You’d think such a potent freedom metaphor would become the soundtrack for their lives, but nothing could be further from the truth. Despite his flawless image, Josh, an artistic and gifted California skateboarder, struggles to find his true role in the world, and his growing aggression eventually breaks him. Kati, a German with a penchant for classic Swiss watches and attic treasure-hunting, is crushed with disappointment for never being “enough” for anyone—most especially her mother. Craving liberation, Kati and Josh seem destined to claim their birthright of freedom together. After all, don’t the “chance” encounters transform your life…or are they really chance?

ARC copy received from the author.
This book first got my attention when I saw its cover and its name. And then I was totally sold when I read “Two babies—Kati and Josh—are born on opposite sides of the world at the very moment the Berlin Wall falls.” Seriously, how wrong can you go with a story line like that? Not very, but I so did not expect it to be as beautiful as The Blackberry Bush.
The story does start with two babies being born just as the Berlin Wall is falling. Right from the beginning, when you look at the family chart at the beginning of the book, you see where Kati and Josh are connected. Finding out how and seeing how they come together in life is an adventure, for lack of a better world, that takes you through different times, different people and different points of view.
I must admit I got quite uneasy when I realized the religious aspect of the book because 1) I’m not religious, 2) Having been raised Muslim, I don’t know much about Christianity, and I’m sure I got none of the bible references. The uneasiness faded away though as events started to unfold because it ended up being a spiritual journey for me, rather than religious.
When it comes to the characters, you can relate to most of them, and some of them I’m sure you know already. Kati I could most definitely relate to, being that she’s weird-looking when judged by what’s considered normal in most societies, and she struggles with it like most of us do. And her relationship with her grandfather Harald, whom she describes as being the only person who “gets” her was very endearing. It’s amazing to see all the characters — both the adults and the children — learn from their struggles and find out that life actually IS beautiful.
I also really like the metaphor that the name of the book represents. First everything is all tangled up like a blackberry bush, then they all start eating the fruit without the thorns ripping their hands and arms. I think everyone should give this book a shot if only for the joy it makes you feel inside. This was most definitely one of the most beautiful books I’ve ever read.
Related Links:
Book’s website
Author’s GoodReads Page
Pre-Order on Amazon
]]>