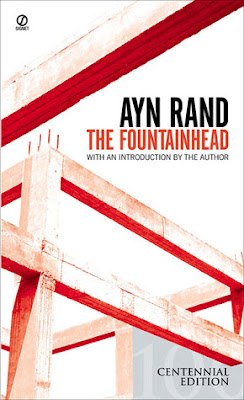 Ayn Rand’s The Fountainhead was one of my book club’s choices from last year. Even though it’s been on my to-read list forever, I found an excuse not to read it whenever I picked it up. Some of these excuses were along the lines of “oh, this book’s too big” or “man, the text is way too small” or “I just can’t handle this right now.” Then, when I was getting ready for my vacation at the beginning of June this year, it caught my eye, and I kind of just threw it in my suitcase.
I’m not sure what kind of journey it takes the reader onto, and I probably won’t try and find out, yet in my situation it took me to very weird places. I read it on the beach, and, let’s say, as Howard Roark was about to do something outrageous, the sun would blow in my face from behind the book. I would picture Roark’s red hair, which would burn and burn under the sun… I think this might be one of the reasons why my sister calls me “a little psycho” at times, but I’m not complaining.
First of all, I couldn’t help being biased toward this book. Even if one hasn’t read any of her works, one has definitely heard of her philosophy, objectivism. Also, I’ve always seen characters in movies or TV shows who give this book to the other and say, “you have to read this,” as if it holds the answer to all of world’s questions or something. I was always going crazy thinking, “why this book?”
I hated all the characters. I hated them so much that I could strangle them to death if they popped up in front of me all of a sudden. And the events made me go “whoaaaa” most of the time. I found both the characters and their actions ridiculous most of the time. They all act like they’ve created the world, and they’re all trying to take one another down. When they’re mad at someone and want to punish them, or  even if they’re madly in love with someone, they won’t stop at any length to torture the other party. These are things I seriously cannot put up with whether in fiction or in real life.
However, what I hated most about the book was that it was very black and white. I’m the kind of person who likes to dabble in the greys, and there was none of that in The Fountainhead. The book was worth praising for managing to get me this annoyed, though, and I’ll admit it was a good read– easy to read even though it’s on the longer side. I think everyone should read this for themselves and decide if it’s worth all the hype it’s still getting.
]]>

The Queen had only one way of settling all difficu

When one has tasted [watermelon], he knows what th