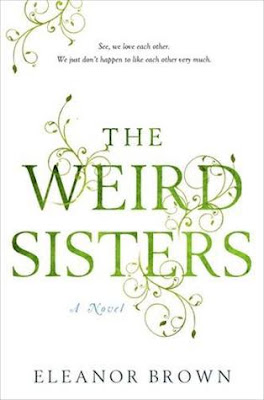 There is no problem that a library card can’t solve. The Andreas family is one of readers.

I’m one of those people who jumps on a book and has to read it if its characters are people who love to read. And “Weird Sisters” is a catchy name… However, the book itself is not so much. When the word “weird” and Shakespeare are in the same story, I’d expected something more different and surprising, but I wasn’t able to find it.
Weird Sisters’ father is a Shakespeare professor at a university in Barnwell, Ohio. Shakespeare is so much in the Andreas family’s life that they even quote him frequently in their daily conversations. Take the girls’ names, for example: Bianca, Cordelia and Roselyn. Cordelia is a mathematics teacher at a university, having never left Barnwell. Bianca and Cordelia, on the other hand, have left as soon as they got the chance to. When they find out their mother has breast cancer, they all get together at home in Barnwell whether they like it or not. Of course, they all bring their baggage with them.
What we read throughout the story is the girls rediscovering one another and trying to get their lives in some sort of order. What they live through isn’t anything too interesting, really. The book was bearable only because it feels close to real life, emotional and easy to read.
The most interesting part of the book was the narration. I’m not even sure I understood who was really telling the story. It was going back and forth between the three sisters, referring to them as “we” most of the time. But then, when all three of them were in the picture, and the narrator said “we,” I was lost. In the end, I just continued reading ignoring who was telling the story.
If you’re looking for a feel-good book, then you can give this a shot. If you don’t care for Shakespeare, I suggest you stay away from it.
]]>

Summer of '59 – Written by yours truly