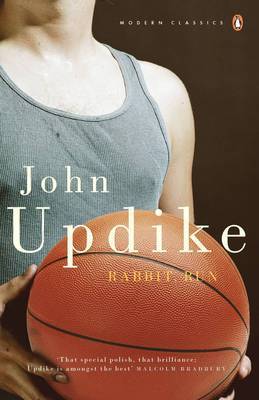 John Updike’s Rabbit, Run was my book club’s choice for May. This year we focused mainly on award-winning books and authors while making our choices. There are award-winners among John Updike’s Rabbit series books, and Rabbit, Run is the first book of the series. Updike himself has won quite a bit of awards as well. (I’m not gonna get into them here; ask Google if you’re curious.) I once again found myself asking, “why do so many award-winning books have to be so damn hard to read?” I try to think of this book as another adventure, one that wasn’t the kind I enjoy. I for sure will not be reading the rest of the books in the series because frankly, I couldn’t care less what happens to Rabbit.
I guess I could summarize the story as such: while Rabbit is trying to run away from one shitty situation, he finds himself in more shit. Rabbit himself and those around him are two-dimensional, characterless characters. For example, when, in the beginning of the book, Rabbit leaves to get a pack of cigarettes and decides not to come back, there are descriptions and descriptions of the roads he takes, the conversations he has at gas stops… I swear I get bored even thinking about it. I don’t think you should waste your time reading this book. It’s enough if you just Google it, read the summaries and know what it’s about.

Then Again by Diane Keaton

Anything goes if you say yes, apparently.