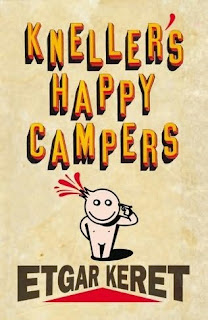 
“Kneller’s Happy Campers” is a strange, dark but funny tale set in a world very much like our own but it’s an afterlife populated by people who have killed themselves – many of them are young, and most of them bear the marks of their death…bullet wounds, broken necks…(those who have over-dosed are known as ‘Juliets’). Mordy, our hero, discovers that his girlfriend from his life before has also ‘offed’ herself so he sets out to find her, and so follows a strange adventure…Full of the weird and wonderful characters, and the slightly surreal twist of events that we’ve come to expect from Etgar Keret, this novella is full of humour and comic flashes, but it is also wistful, longing for a better world and perfect love.

You can read the first and last lines of the book at the firstandlastlines blog.
The blurb of the book really does explain what it is: “a strange, dark but funny tale.” A love story, in essence, but there’s a lot more than that in it. Mordy, after killing himself, find himself in the afterlife world, which really is a lot like ours. The difference is that people walk around baring the wounds of how they killed themselves, bullet holes in their bodies and such. At the bar he discovers, Mordy meets Uzi and they become friends. And then, when Mordy finds out the love of his life – or so he thinks – killed herself and ended up in the same world as his, he and Uzi go on a road trip to find her. That’s also where they meet Keller.
I honestly don’t want to go into too much detail because it’s such a tiny book that I feel like I’ll spoil a lot if I say more. In every chapter, which aren’t more than four pages tops, Mordy finds himself in a different “pickle,” if I may. His adventures are fun, especially his friend Uzi, but sometimes you feel weird for finding it funny because, you know, they killed themselves. Here, everyone wants to know what you know for a living, but in that world, they want to know how you did it. There are all sorts of people who did it in different ways, and some of them take it way too personally if asked how. Remind you of anybody? Exactly.
What I got from this book is “miracles happen when you least expect them,” and I love it. Also, my sister has told me the movie Wristcutters was based on this book. I’ll have to watch that again because it’s been a long time since I did, and I can’t honestly say I remember much of it. This was my first time reading an Edgar Keret book, and I definitely would like to read more of his work.

“What matters in life is not what happens to you