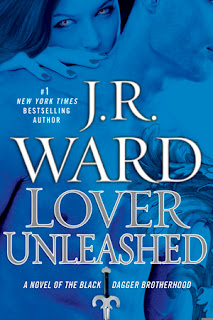 
Payne, twin sister of Vishous, is cut from the same dark, warrior cloth as her brother: A fighter by nature, and a maverick when it comes to the traditional role of Chosen females, there is no place for her on the Far Side… and no role for her on the front lines of the war, either. When she suffers a paralyzing injury, human surgeon Dr. Manuel Manello is called in to treat her as only he can- and he soon gets sucked into her dangerous, secret world. Although he never before believed in things that go bump in the night- like vampires- he finds himself more than willing to be seduced by the powerful female who marks both his body and his soul. As the two find so much more than an erotic connection, the human and vampire worlds collide … just as a centuries old score catches up with Payne and puts both her love and her life in deadly jeopardy.

This review might have spoilers only for those who haven’t read the previous books in the series.
I believe I made a mistake in thinking that Lover Unleashed, the 9th installment of the Black Dagger Brotherhood series by J.R. Ward, could live up to Lover Mine (You can read my Lover Mine review here). I so did not expect to get bored either, which happened more than once, I regret to say. It took me forever to get a hold of this book, and when I read after months of anticipation, it was a bit of a letdown.
Lover Unleashed is the story of Vishous’s twin sister, Payne. After her ‘paralyzing injury,’ Vishous’s wife, who’s also the Brotherhood’s doctor, insists on getting her ex-colleague Dr. Manuel Manello to take a look at her. Even though she goes through a successful surgery, Payne still can’t move her legs, until she’s with Dr. Manello, whom she refers to as “healer” throughout most of the book. In the end, we discover Payne has a healing power (she heals Manello’s sick horse and the doctor himself), and it only comes out when she’s around the doctor. And then, just like it happened in the previous books, Wrath, the king, allows the doctor to stay with her at the compound to live happily ever after.
I say it this way because that’s how easy it felt. In all the other books, I felt there was much more depth to the characters, both due to their being what they are and their internal conflicts. Especially after stories like John Matthew’s and Zsadist’s, this one just felt like “your legs are okay, we love one another, let’s go!”
Also, this felt like Vishous Part II instead of Payne’s story. Vishous has always made me uncomfortable, and I’ve realized once again I’m not crazy about him and Jane as a couple either. And I’m also mad at him for making Butch go through all that which I won’t reveal here. I guess my biggest problem with this book is that it was so outside of the Brotherhood. There was Payne and the doctor, Vishous and Jane, and then a little bit of Butch. I was very, very excited when Ward switched to Qhuinn and Blaylock in between, but those were tiny, tiny parts of the book. (Between, I honestly CANNOT wait for them to have their very own book.)
Because the story was so outside of the Brotherhood, everything I love about them — the loud rap music, the cracking jokes, the playing Monopoly, the Last Meal atmosphere — wasn’t in the book. I mean, not once did we see Rhage suck on a lollipop or Zsadist burst into song. In addition, the new ‘vampire clan’ also felt out of place even though I’m guessing they’re going to be big trouble for the Brotherhood in the future.
The tenth book in the series, Lover Reborn, will be Thorment’s book. I’m hoping what Payne’s story lacked will reveal itself with Thor since he’s been in the Brotherhood for a long time, and there’s no way Ward can leave them out. Even knowing John Matthew is an important part of his life makes me believe he’ll be around more, and I can’t help but get excited. Lover Reborn will be out on March 27th this year, and I’m hoping I get a hold of it in time.
]]>

The Queen had only one way of settling all difficu

When one has tasted [watermelon], he knows what th