Review: We by Yevgeny Zamyatin 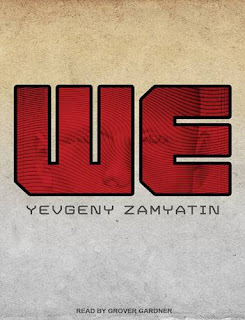 Title: We
Author: Yevgeny Zamyatin
Publication Date: First published in 1920
Publisher: Penguin Books (1993)
Number of Pages: n/a
Kindle Edition This edition of We, the mother of all dystopias, is a new, XXI-century literary translation into idiomatic, contemporary American English that goes beyond the customary word-for-word translation. Unlike other currently available English translations, which have taken pains to downplay the politics of the original, this translation, commissioned specially by ENC Press, enhances, emphasizes, and deepens the transcendent relevance of Zamyatin’s original take on the way politics affect the human condition, more crucial than ever in today’s political climate, as underscored in the publisher’s introduction. * * * “Of all tyrannies, a tyranny exercised for the good of its victims may be the most oppressive. It may be better to live under robber barons than under omnipotent moral busybodies. The robber baron’s cruelty may sometimes sleep, his cupidity may at some point be satiated; but those who torment us for our own good will torment us without end, for they do so with the approval of their own conscience.” — C. S. Lewis As far back as 1920, Russian writer Yevgheniy Zamyatin wrote We — the novel Ursula K. Le Guin called “the best single work of science fiction yet written” — the book that inspired 1984, Brave New World, Anthem, and the whole literary genre of dystopia. Digit D-503 is a proud and happy citizen of the United Nation, where people live in identical glass houses and think identical transparent thoughts, equal among themselves and equally happy to be cogs in the machine of the most perfect society that ever existed on earth. The designer of the Integral, the United Nation’s first spaceship, meant to carry “mathematically error-free” happiness to other forms of intelligent life “possibly still existing in the primitive state of freedom,” D-503 is a True Believer in the path of the United Nation until he is mugged by reality that comes in the guise of love for a beautiful, cynical woman who rejects state-sponsored happiness and delights in leading a rebellion. Yet the rebels’ only virtue is their rejection of the authority of the Do-Gooder, the annually unanimously reelected leader of the United Nation. Their revolution is but for its own sake, and their attitude toward “human slivers” is just as utilitarian as that of the United Nation: to either group, an individual life’s worth is measured only by its usefulness to the cause.

This was the second book we read as a book club, Ex Libris. First I must start with –excuse my French– bitching about the publisher’s introduction: It was way too long and way too detailed. I personally like to read the introductions in the end, after I make up my own mind about the book first. On Kindle, it’s a pain in the butt to scroll back so many pages (or I haven’t found the better way to do it yet), so I read it first and quickly regretted it.
The book itself, however, I enjoyed a great deal. It’s quite crazy how they’ll shove Orwell’s 1984 down your throat in high school, but nobody even bothers to mention WE. Now that I think about it again, I’m not even sure if they knew about this at all. I do love 1984, and it was very exciting to read the one book that gave birth to it and many others alike.
Since I was so pissed off at the introduction, I’m not going to get into too much detail here. It’s a book about “the collectives’ rights to individuals’ souls in the name of revolutions and progress.” It’s a tiny book that makes you ask big questions that probably were already wandering in the back of your head, and you find yourself questioning the world over and over again. Revolutions give birth to too much sorrow, yet great things come out of them as well. And I honestly believe this book is one of them.
My research showed that the English translation I’ve read is the most perfected one out there. I found this hard to believe most of the time, though. I of course have no idea how fluent the original writing is, but the translation is cringe-worthy and hard to understand at times. Nevertheless, I believe everyone should give this one a shot.