The Sea by John Banville 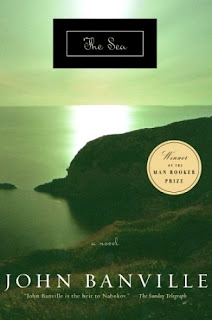 In this luminous new novel about love, loss, and the unpredictable power of memory, John Banville introduces us to Max Morden, a middle-aged Irishman who has gone back to the seaside town where he spent his summer holidays as a child to cope with the recent loss of his wife. It is also a return to the place where he met the Graces, the well-heeled family with whom he experienced the strange suddenness of both love and death for the first time. What Max comes to understand about the past, and about its indelible effects on him, is at the center of this elegiac, gorgeously written novel — among the finest we have had from this masterful writer.

This was a hard one to read, and I think it’s even harder to review. The Sea is the first book we’ve read in my book club Ex Libris this year. We couldn’t meet until mid-January to make our selections for the year, and since half the month was already gone, we thought we would start with a thin book. It’s a thin book, alright, but it took me a week to read, and quite a bit of effort.
That isn’t to say I didn’t like it, because I really liked it in the end. It really is a “gorgeously written novel,” and even though I’m not a big fan of long, way-too-detailed descriptions, Banville is such a master at his craft that I enjoyed them. My only problem was the long sentences that would last for 5-6 lines. It worked well for the purpose of the book, but also made it hard to read. This is why even though it’s 200 pages it took a while to get through.
This year in book club we’re reading quite a few award winners, and this is one of them. Banville’s The Sea is the 2005 Man Booker Prize winner. I did a little bit of internet research after I was done reading, and found out he’s been a runner up before, and he wrote this book to win. Well, congratulations, sir! Now, getting to the story. . .
The protagonist, Max Morden, is a middle-aged man. Not that he says this himself, but from everything else it’s quite obvious. He recently lost his wife, and he goes back to the place he remembers from his childhood. A place by the sea where he would spend the summer with his family, also a place where he met the Graces, “the gods” as he calls them. He befriends the kids, Chloe and Myles, who are around his age. The reason for him wanting to get close the family, at least in the beginning, is that he has a crush on the mother, Connie Grace.
The book goes back and forth between the past and the present of Max, him remembering and thinking he’s remembering. His mind is foggy, which I guess makes up for the very long sentences and the confusion in his narrative. At present, he’s staying at what used to be the home of the Graces, where he would hang out quite a bit that summer he spent with them. Through his foggy memory, he’s telling us about that summer, and about his wife’s last days.
I honestly did not like any of the characters in this book, maybe except for Rose, who’s Chloe and Myles’s nanny. Her presence is quite indistinct toward the beginning parts of the story: just the nanny whom the kids (especially Chloe) hate and torture. But toward the end, we find quite a bit about her, and she unfolds disturbing events.
My biggest problem with Max was that he didn’t seem to like himself or anybody, and he judged everyone around him pretty harshly. He’s ashamed of his family because they’re not rich, and just because the Graces are, he sees them as “the gods.” He has a daughter, but somewhere in the book, he says, “kiddies in general, I’m afraid, bring out the not so latent Gilles de Rais in me.” Now, Gilles de Rais was a serial killer who killed children in the 1440s, so all I could say to that was what the fuck, Max? He also describes his daughter as an ugly creature who doesn’t bother to live up to her potential. Long story short, it would be painful to have a father like that, I think…
Chloe Grace was the second character I truly disliked. She’s quite a psycho, with the way she plays with her brother and Max and wishing Rose will be “washed away.” “I hope she gets drowned,” she says. Who, even a kid, would wish that upon anybody?
Max later reveals, “I drink like a fish but no, what fishes do is breathing.” This might be a tiny spoiler, but really, it’s pretty obvious throughout the book that he’s somehow drugged. This adds to his confusion. While he describes the bed he sleeps in at the Graces house in the present time, he says, “By the way; the bed, my bed,” which leads me to believe he still doesn’t feel like he belongs even though he came back to the Graces house to get some answers and set his mind at ease. Also, as broken as he is about his wife’s death, he’s also mad at her for leaving him: “You cunt, you fucking cunt, how could you go and leave me like this?”
The best part of the book, I think, were in the descriptions and some of his analysis. I noted quite a few while reading, but I’m going to share two of my favorites:

One of the older boys from the field assured me one day with a snicker that a fringe like Chloe’s was the certain sign of a girl who played with herself. I did not know what he meant, but  felt sure that Chloe did not play, on her own or otherwise.

Happiness was different in childhood. It was so much then a matter simply of accumulation, of taking things–new experiences, new emotions–and applying them like so many polished tiles to what would someday be the marvelously finished pavilion of the self.

This is not one of those books I’d want to go back and re-read, but it’s a book worth reading, especially if you like a challenge. And I assure you that the ending will surprise you.]]>